This is an exciting and challenging class, and all nine classes are just below. Pastor George Koch begins at the beginning: book one, sentence one, word one, as we learn to read the Bible and understand its structure and importance. And here's a great surprise: By the end of Class 9 you will be able to read Hebrew and already have a vocabulary of over 100 Hebrew words! It happens very naturally as each class unfolds - not with memorization, but as part of a more profound exploration. You'll see! We hope it will bring Scripture alive in a way you may never have experienced!

Download full notes for all classes in one PDF document.

Includes notes for all nine classes. This document is about 30 megabytes.

Class 2 - The second sentence in Genesis, what the Spirit did "over," and WHAT it was over. Some real surprises from the Shocken Bible by Everett Fox, including God as Elohim.

Class 3 - A review of the Hebrew letters and words learned so far. An explanation of the "nikkudim," the dots and lines used to indicate how to pronounce Hebrew words. An introduction to the names of God. "Jehovah" isn't one of them.

Class 4 - Some basic Hebrew font styles and where they are used. The Hebrew letters learned so far. Familiar words in Hebrew, including El Al, Coca-Cola and Pepsi-Cola. (Note that the script version of Hebrew that I hold up about 10 minutes into this is wrong. The font is reversed. The full screen display of the script font, and the class notes, are correct.) A portion of a real Torah scroll, and how it is read. A recording of the first five verses of Genesis, in Hebrew, is right here:

Class 5 - More structural insights including the organization of the Tanach (or "Old Testament") according to Jews and Christians; the use of CHIASM in Scripture, and the use of various kinds of parallels in Hebrew poetry and prose. Each of these has a purpose to focus on a specific insight within Scripture.

Class 6 - Finishing the complete Hebrew alefbet. Some common Hebrew words in Israel and in the U.S., including Mogen David wine, the Red Magen David, the Israeli Flag, Challah, Bethlehem, Shabbat, Shabbos, and more.

Class 7 - Revealing the Hebrew words we ALREADY know and don't even know that we know! Some real surprises here!

Class 8 - A deep look at Genesis 22, the sacrifice of Isaac, also called the "Akedah," including the portion of an actual Torah scroll of this passage.

Class 9 - A final summary and review of all that has been learned, and significant resources for further study of both Scripture and Hebrew. 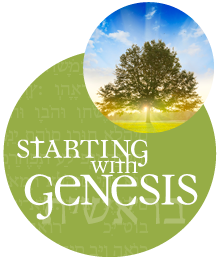